I'm a little behind on the reporting

and his friend, Darrell (who writes Hammered Out Bits) ...

Vandy (who is sometimes known as Anti-V) and I alternated being watching the bubbles, enjoying the pleasant weather, taking pictures, sewing and spinning. Sorry, no pics of us enjoying our activities.

Although, at dinner afterwards, Neil decided to play with my hair.

At home in the garden:

This spotted lilly is finally blooming. Of course I don't know it's exact name. :)

This feverfew is still blooming, while it's neighbouring feverfew stopped blooming a few weeks ago. My garden is very strange this year.

This is just a small part of the harvest to date. The tomatoes have been quite prolific this year.

Well. I went back to the Michigan Womyn's Music Festival for the first time in 11 years. The last one I attended was the 20th anniversary fest, and this was the 31st.

Ya know how everyone says 'you can't go home again'?

Well, what if you do go home and everything is exactly as you remember it, but you find out that you've changed?

I found my way to my campsite, the same darned area I've always had, and it was waiting for me. 11 years later. And there were even other Canadians nearby. :)

I love that spot in the woods.

Over the next two days, I discovered that I'm not ageing as well as I'd like. My friend Janet is 12 years older, and I think she handled the physicality of camping better then I did. I need to take care of my body better.

I discovered that I really don't have as much patience as I might have before, or the ability to shrug it off, or that I notice more and judge more quickly.

The Festival kitchen doesn't compost it's food waste? Like... say what? Okay, so when someone else mentioned this on the Festival bulletin boards, the enormority of the task got explained, and I kind of understand. But surely there must be other alternatives to simple landfilling.

Why did it feel like all 3000 women in attendance had to walk up and down the aisles all throughout the concerts without even pausing during the songs as the Festival etiquette requests? Why did so many use flash photography, which is also requested not to happen by the Festival etiquette?

Why were there so many women playing with glowsticks during the nightstage concert? More landfill, and not so happy chemicals in them to boot.

Why is the Trans issue still an issue, a dozen years later? Why can't transsexual women respect the Festival's preference to be for girls and women who were raised as women in the same skin they've always been in? It's just one little week of women-only space. If I wanted to spend the weekend with male energy, I'd have stayed home with my favourite source of it - the hubby. Is it so much to ask?

Why did so many women not show up for their workshifts? Workshifts build community, make the festival more accessible financially, and are fun to boot!

It seemed like.... it was one great big party, and the social consciousness has flown the coop.

It's probably just as well that I didn't go back for the 30th anniversary party last year. I'd had have been that much more annoyed, with more then twice the number of women partying themselves silly in the woods.

And yet.... still... somehow, I feel fulfilled. I took a nap on sunday afternoon, loving that quiet spot in the woods, surrounded by women's voices in the distance. The comedians were hilarious. I discovered some new music. Issa (the artist formerly known as Jane Siberry) was her usual wonderfully quirky self. And she certainly impressed the audience with her attire on stage. :)

And after a decade's intervention that at some point included a serious crash in self-confidence around driving - I didn't kill us on the way down, or the way back.

Here's a few images from last week to hold the place of a post while I sort out the trip to Michfest in my mind.

Lily of some sort... 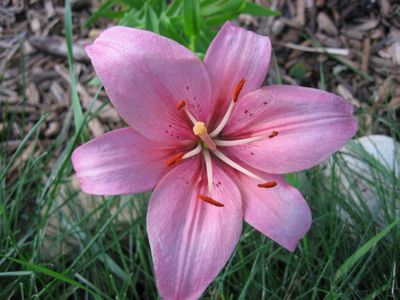 Sunflower, planted late in the year and just getting started. I hope it's big and tall next year. 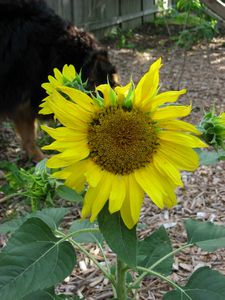 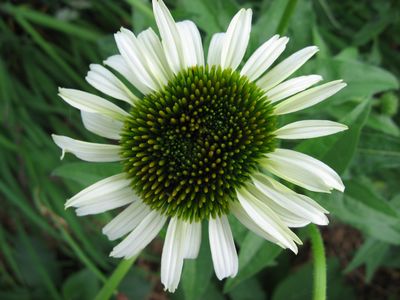 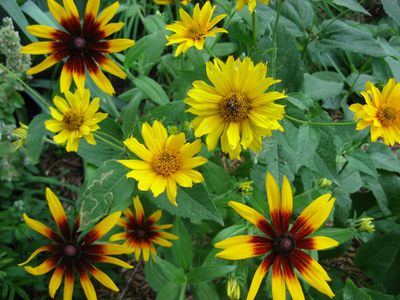 It's a liatrus of some sort. 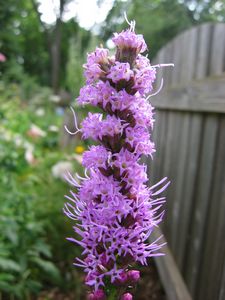 Clearly, there's a theme here with regard to my style of gardening. While I try to remember to plant the tags next to the plants so I can remember what they are, that doesn't always happen. And I have a brain like a sieve with regards to remembering plant names all by myself.

My backup brain (aka the hubby) says "it's your garden" when he doesn't remember either.

Clearly, I'm not gardening for details.

First, we have our usual garden fare:

I think I need more then 2 cucumbers to start pickling. Perhaps next year, more cucumber plants. 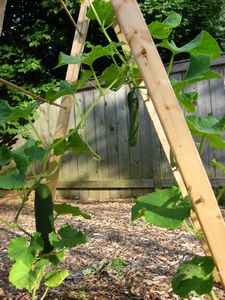 But I've got more then enough echinacea, if I ever get off my butt and start to use herbs medicinally. But it won't be this year - I am way too busy.

One Local Summer, almost:
This morning, I was, quite unusually, ready before the hubby and staring at my tomatoes and wondering how to use them all this summer. The idea of a tomato sandwich appealed. So quick like a bunny, I threw together bread, fresh from Angie's Kitchen (just around the corner from me and sold at the farmer's market down the road) and tomatoes (from my own garden) with margarine and a wee tiny bit of salt.

It occurred to me while I was making it that this mostly fit the criteria for a local meal, but I got all fussy in the head and didn't go and take a picture of it. After all, the margarine and salt aren't local.

But having had no breakfast, and being completely without will power, I just ate it for morning break at work and it was.... wonderful! I'll have the bagel I bought for breakfast for a late lunch instead.

Tomorrow maybe, I won't be so fussy about qualifications and take a picture in the morning.

Michfest:
This weekend, a friend and I are off to the Michigan Womyns' Music Festival, aka MichFest, for short. I'm one part excited as all get out, one part nervous of the drive, one part wanting to stay home (I'm a Cancer, we're homebodies), and one part starting to get tense about not being properly packed yet.

Conflict is us: I'm also an Aries moon - cardinal fire, and cardinal water (Cancer). So much fun. Ya know, assuming I put much stock in astrology and all...

New Rovings:
Mmmm mmmm! My but Wellington Fibres does a good job. And very very decently priced as well! I just got the Shetland fleece that I picked up in June (check the archives, apparently I don't have individual post links set up) back from the Mill and the rovings are beautiful!

I got so excited by the price, even before seeing the results, that I took them all the other fleece in the house as well when I went to pick it up. One bag of mystery fleece, and several bags of Icelandic fleeces.

The question of the day is: should I take the new rovings and a drop spindle to the Festival, or not? My decade old memory of the Festival says that would put me firmly in the 'wyrd' category. That is, despite the stilts, prom dresses, sarongs, and various leather accroutements that are all pretty normal festigear...