Life keeps getting in the way, ya know?

Not in the way of local eating - one does have to eat, after all. We might as well do it locally.

But it does get in the way of blogging about it.

So.... since I theoretically missed Week 3's deadline (yesterday) - I give you Week 3 _and_ 4. Just to get caught right up so I don't have to worry about it again for another week. 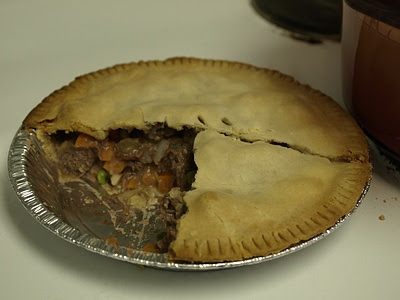 Meat pie - it's possible that some of the ingredients aren't strictly local, but the trick here is that the beef is Black Angus cow from Well Fed Food in Ayr, our favourite farm store. The family that runs it raises the Black Angus cows right there on the farm, and feeds them properly (no chemical additives) during their lifetime. They also sell their neighbours' farm fish, chicken, turkey, pork, venison, wild boar, eggs, honey, and milk.

Anyway, these lovely farm folk want their business to make a go of it so they recognized that folks want convenience, and they have hired a professional chef in town to make up these meat pies, which they then sell frozen and waiting. Good ingredients go in here - the meat and the creation of the pies are local, and although I haven't actually asked, I'd betcha that most of the vegetables and spices in it are local as well. 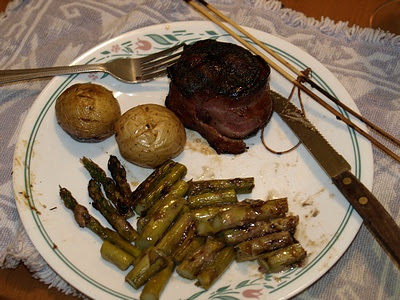 Meat, again from Well Fed Food, aspargus and potatoes from just down the road at the other nearby farm store - Herrles. Herrles is a little closer in that we drive by it every day on the way to work. Even the marinade on the aspargus is local, though I can't remember where it's made.

Skyr is a delicious Icelandic treat, that theoretically goes back as far as Viking times. It's sort of a cross between cheese and yogurt, most of it with a .5% fat content.

It's very difficult to find commercially - there's a small place in Gimli, Manitoba that makes it in Canada but the shipping usually doubles the price of it.

The largest Icelandic skyr company - skyr.is - has recently started making it available in the US at Whole Food Markets. Unfortunately, Whole Foods can't make it available at their Toronto store - I've asked. Something about the Canadian Government being fussy about milk products.

Just recently back from Iceland, I have to have continued access to this delicious treat! So I've decided to try to make it myself at home.

Understand that it's also difficult to get english language information on how to make skyr at home, and that I have no concept of chemistry, and have never done anything even remotely like this before. :)

Basic recipe that I started with:
Bring 4 quarts milk to a boil, and cool to lukewarm.
Add 2 tbsp starter (skyr) to 1/2 cup of the lukewarm milk.
Stir back in to the rest of the milk.
Add 12 drops of rennet.
Store for 24 hours in a warm place.
Drain liquid through cheese cloth.
Remove cloth, put in bowl, chill.

Nothing about what kind of milk.

I tried 1% milk first. I heated it til it got bubbles. Bubbles = boiling, right? I've always been a sort of fly-by-seat-of-pants kind of cook. Measuring is for wimps.

Added the starter, and the rennet, and turned the heat off and ignored it for 24 hours.

It didn't turn out so well - gritty and dryish.

Read some more - bought skim milk this time. Paid attention to the thermometer this time - didn't judge by bubbles alone. Brought it to 90 degrees celsius, and then let it cool to 40 degrees. Added the skyr starter, and then the rennet. I used less rennet this time (only 9 drops) - other recipes suggested an inverse relationship between the amount of milk and rennet. More milk, less rennet.

I also had trouble finding rennet. I ended up with a vegetarian rennet from a health food store. I don't know enough about the chemistry to know if this matters but I do know that rennet in it's original form is certainly not vegetarian!

I made more effort to keep this second batch warm during it's waiting time, not ignoring it entirely.

The first batch, I squeeze dried. This second batch, I just found a way to hang it in it's cheesecloth and let it drip for a few hours.

Pictures? turned out awful. Either the flash overexposed it, or turning off the flash underexposed it, and I didn't like the "fixes" in the photoshop.
posted at 9:09 p.m. 5 comments:

Email ThisBlogThis!Share to TwitterShare to FacebookShare to Pinterest
Categories: Skyr 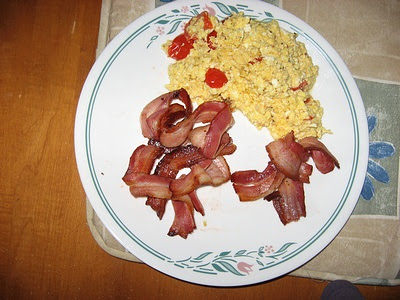 Bacon and Eggs for lunch.

Bacon is from Well Fed Food in Ayr - it's a neat little farm store that is gathering meat from local farmers that it believes feeds their meat decently during it's lifespan. Ayr is 25km from us.

Eggs, cheese and tomatoes - Eggs are from Elmira, tomatoes are greenhouse grown in Elmira, and cheese is both organic and from Millbank.

Later this week, I'm going to ponder the idea of local eating and how I define local, and talk about my first attempt to make skyr (an Icelandic delight that we can't easily get in Canada).

We're home again and the garden is full of riotus colour (and weeds) to greet us! 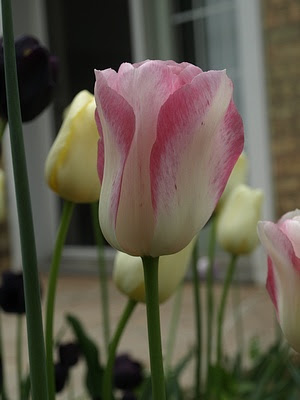 A garden party has been suggested, and I like the idea, for mid-July. At the moment, I'm not sure I'll be able to make it happen or be content with my garden by then.