B is for Blog, C is for Christmas

Yeah, I'm still here. Life just kinda got away from me for a bit.

I started the blog in April 2005 and in that first year (April to December), I made 83 posts. In the entire year 2006, I've only made 65 posts. My urge to blog has decreased significantly.

And yet, I've gathered more comments, switched to the new Blogger, and installed a site meter just so I can see how few hits I'm getting.

I'm conflicted. And I don't really know what category I fit in as a blogger. If I knew that, I could join a few rings and get more hits that way.

Of course, posting more often might get me more hits too....


Mother of Invention asked what the big present pictured in a previous post was - and it turns out that it's a mini-greenhouse! I can get started with new seedlings earlier in the year without clogging up the mudroom.

I also got (from the hubby) several new books and cds and dvds - on gardening, viking scotland, womyns' music, and the Animaniacs!

Mom and I made contributions to each other's wardrobe - both from Northern Reflections! While it's sometimes been difficult for Mom to buy clothing for me that I appreciate....she was right on the money this time!

Christmas up at the hubby's family home was fun in a whole different way. His brother and two sisters and their respective spouses are bound and determined to reproduce so there is a lot of kids to up the energy level. Running around the yard with the Nerf rockets, and watching them open the presents was just wonderful.

And there have been plenty of turkey sandwiches for me. The best part of holiday season food. :)
posted at 10:21 a.m. 4 comments:

I am a Sunflower!

"When your friends think smile, they think of you. There is not a day that goes by that you can't find something good about the world and your fellow human."
posted at 3:53 p.m. 3 comments: 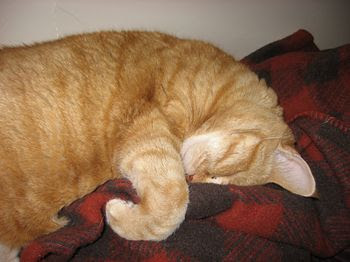 Ginger's all curled up to sleep. At 18, she does little more then sleep, eat, and just generally put up with her mummy's use of the macro feature on the camera. At bedtime, she moves from the back of the couch to sleeping pressed up against my stomach in bed.

Head on over to The Hidden Paw for more of this weekend's kitties.

ABC, and webrings, and the Liberals - a very mixed day

"A, your an Amazon
B, growing brave and strong
Clearly and Consciously you C....."

Lyrics from a song from the 70s. Part of the 'radical feminist' experience. Written by the delightful Alix Dobkin. I can't find the lyrics on the web, but you can buy her music at Ladyslipper.

Funny, the more research I do on the web to write anything on the blog about feminism, the more I'm convinced that there's a serious gap in written 'herstory'. Not that I'm volunteering to fill that gap.

Cyndy, of Riverrim, asked:
"If you are looking for hits, you could join a web ring?"

I don't know where I fit in. Is there a webring for people who just write randomly about their life?

Often it's about the garden, but heck, flowers make for pretty pictures. Rarely, it's about fibre crafts (or fiber, depending on how I feel like spelling it - I hear the first version is Canadian, eh) but just how many pictures of spinning can one post?

I've been watching the Liberal leadership convention today....Stephane Dion won! It's the first time in Liberal history that the front runner in the process didn't win.

It's not what I expected, or wanted - Gerard Kennedy impressed me with his outspoken opposition to Prime Minister Harper's "Quebecois nation" motion.

But I'm very happy that Michael Ignatieff did NOT win. One just can't leave Canada for 30 years and come back expecting to lead it. It's just not right in my books. I don't care how many books he's written or that he taught at Harvard. Big deal. If the Canadian university system is good enough for me to work in, it's good enough for him too.

Not that I vote Liberal. I generally go with the New Democratic Party. But the Liberals have the biggest chance of stopping Stephen Harper's Conservatives in the future. And that is very important to me.