Nina asked, in the comments:
What does it take to become a Flugelman?

First, the basics of Bogenschutzenfest. The hubby says it's history is that of drunken Oktoberfesters running about shooting at weather vanes with their bows and arrows.

At some point, they made it a family event and created a styrofoam bird to sit up on top of the flag pole instead. There's still drinking, let's not make that mistake - it is Oktoberfest, after all. But the event is held during the day and it's hard to be too drunk that early in the day. 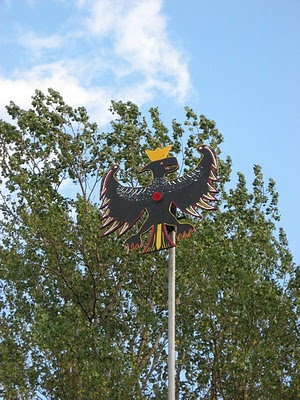 This picture is actually the bird used for the King and Queen shootoff, I didn't get a pic of the styrofoam version, but they look the same.

I made the shot that brought down the right wing. 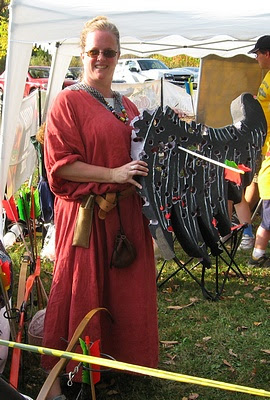 Okay, so 4 or five rounds of 70 odd people aiming for that wing rather loosened it up for me, and I was just lucky enough to hit it when it finally decided to break off. But still..... :)

I've been shooting in the contest for the last 5 years and this was my first time winning a prize.

The guild membership / badge is a one time only thing, upon your first win, but the badge indicating which body part you got can be had over and over again as you win them. The trophy also happens every time you get a body part.

There's also another part to the contest - that of becoming the King or Queen of the shoot. The bird changes to plywood version, and there's a red button in the middle that hides a shotgun shell. Hit the red button, and the shell goes off.

We break into genders and each person gets one chance to hit the red button. You're eliminated if you don't get it, and there's a shoot-off if more then one of you do hit it. We need one woman, and one man to hit the target to become the Queen and King of the contest. The King and Queen are encouraged to join the Oktoberfest parade later in the week.

Oh, and there's one more draw to the contest but it may appeal only to a limited few. My mother is firmly in that club - I have got to get her to come out some year because.......

Elvis is a member of the Guild, and on the organizing committee. Yup.... Elvis. And you all thought he was dead some 20 years ago, yes? 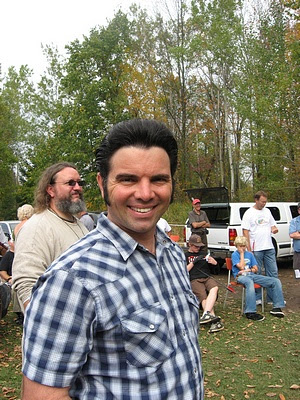