First, my apologies. It's been a long time without a post.

So... I had a couple of days off last week and finally got caught up on two dye baths that I'd had fermenting about the house for weeks.

Woad - it's my first attempt at dyeing with woad. When we moved the plant to a new location in mid-October, the hubby strongly encouraged me to try dyeing with it. I was reluctant because it was just one plant, and the reading that I'd been doing suggested that it takes the leaves from 24 plants to dye 4 ounces of wool.

Many mistakes later.... not a bit of change in the wool, at all. Colour me frustrated.

Elm bark - One of my dye books, which I otherwise quite enjoy so I won't malign it with identity, suggested that all elm bark needed was to simmer an hour and it would give a subtle cherry colour. That didn't work.

A friend, and a mailing list suggested soaking in alcohol for a few weeks. So I dutifully added alcohol to the pot and let it sit for weeks. Until last week, when I heated it up and tried it again.

Still no colour change. At all.

I began to wonder if it was me, the fates, my water, or the phase of the moon.

So I dug out the commercially prepared cutch crystals, dissolved them in boiled water as directed, added the solution to a pot of water, stuck the wool in and presto (an hour later) - butterscotch dyed wool!

I'm a little disappointed that I so butchered the ones that started with nature and needed some work, but I will enjoy spinning that wonderful butterscotch colour. And I will do my research and make those other dye baths work eventually.

Email ThisBlogThis!Share to TwitterShare to FacebookShare to Pinterest
Categories: Fiber

Clearly, I need to get out more.

There were lots and lots of wonderful entries at this year's Kingdom of Ealdormere Arts and Sciences Fair. They call it a Fair now, and not a Competition like they used to do, but there's still a large element of competition in the air. I certainly felt it.

The interesting thing is that after a full day of talking about my entries, and some lovely compliments on my weaving - I actually feel like finishing the piece that has been languishing on the loom for the past year.

Anyway, without further ado then, my entries: 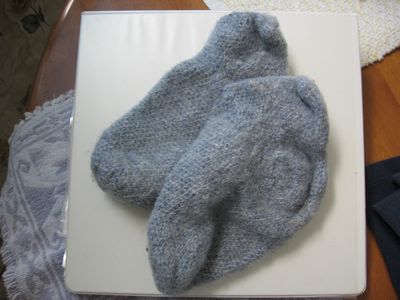 Naalbinded socks. Naalbinding = Viking Era handcraft, similiar to knitting and crocheting, both of which were invented several centuries later. 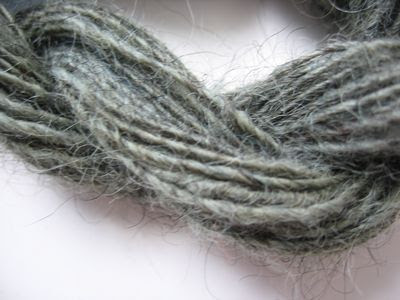 Indigo dyed, combed and handspun from the fleece, skein of yarn. 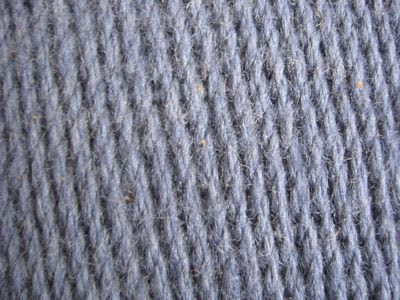 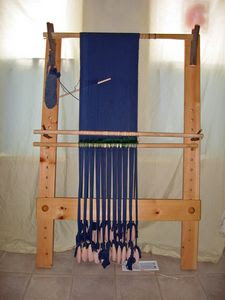 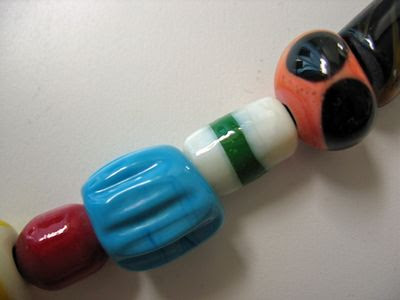 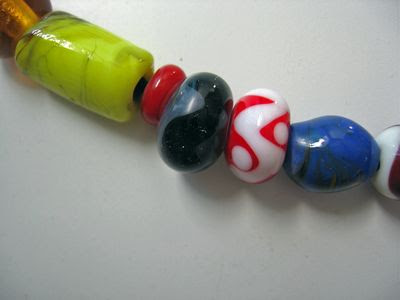 And some of these beads. They're made with modern lampwork techniques but they are very similiar in shape, size and design to Norse Viking-Era beads.

I also want to start making beads again. It's been awhile.

And I thought a day off would be restful

Okay, so I slept in until 8am (which is still an ungodly hour but better then the usual 6:30am), and had a leisurely breakfast of christmas candy, fruit and toast. But then I've spent the next few hours engaged not in the craftiness that flitted across my mind in the bath, but instead....
....housecleaning.

By the end of the day, I was having a mini little crisis of faith - so much to do, so little time.

There's still more housekeeping to do - I had to give up at some point - but I really need to get to work on my entries for the Kingdom Arts and Sciences Fair this weekend. For those of you not in the know, that's the big deal once a year for the historically minded crafty people who hang about with the strange people of the Society for Creative Anachronism.

Which I do, so I guess that makes me strange as well as historically crafty. :)

So anyway, I have five entries, across 3 categories, which qualifies me for the Pentathlon - a special category for the truly exuberant among us. But I'm not entering Pentathlon until I'm better at what I'm doing. I'm a little bit of a perfectionist, tempered by the reality of imperfection.

If I'm not making sense, it's the headache that won't go away.

My 5 entries then, because that was the point of the previous paragraph after all:
- a skein of yarn (dyed in the fleece, combed and spun on a drop spindle)
- my work-in-progress on the warp-weighted loom (which I've otherwise been ignoring for months now)
- a string of glass beads
- naalbinded socks
- and for display only, a book of dye samples

Well, no one's tagged me, but I've seen this meme on a few sites now and I'm interested. My mind works in random ways. I gather I'm supposed to write 20 random things about myself and then tag as many people as it takes in minutes to write.

I'll skip that second part. I probably don't know that many bloggers yet. But here's the 20 random things.

1. I have a dog named Leif the Licky.
2. And a cat named Ginger.
3. And a husband named Neil.
4. Leif came with the husband.
5. I fell in love with the dog first. He is adorable beyond all measure.
6. He's my first dog.
7. I'm allergic to both the dog and cat, but mostly to Ginger, the cat.
8. I'm not allergic to the husband.
9. I've had Ginger for 16 years.
10. I feel guilty when I think about her dying because I need to not have sinus problems anymore, but I won't give her up.
11. I have a degree in Political Science that I don't use much.
12. My favourite non-fiction author, whom I've met once or twice at the Michigan Womyns' Music Festival, wrote me last night to tell me about her newest essay, published here. Her name is Kay (Leigh) Hagan.
13. It's a good thing that I'm not doing the second part of this meme because it's taken me more then 24 hours to come up with this many random things.
14. I find Kay's latest essay very disturbing. I could be her sister... eyes sliding away.
15. I have now baked 4 apple pies - one too dry, one too wet, one damnably boring of taste but otherwise technically perfect, and one just a little bit undercooked but absolutely delicious.
16. And three meat pies, dozens of tarts and two pumpkin pies.
17. There's a big pumpkin out on the front porch waiting to be turned into more pumpkin pies, or rotting, whichever comes first.
18. Real pies - from scratch, from making the pastry and rolling it out and scorning of pre-made shells, and 'just add this' pre-made mixes.
19. I'm actually proud of, and intensely fascinated by, this growing domesticity.
20. And that's weird for a former radical feminist.

21. Now that I've started, I don't want to stop.
22. It's not 'former' as in 'gave it up, changed my mind, suddenly turned into a funny-mentalist' but 'former' as in 'I still believe, but the function of my life has changed'. Just to be clear and all.

Email ThisBlogThis!Share to TwitterShare to FacebookShare to Pinterest
Categories: Memes

Yesterday, we went to an SCA event at Casa Loma in Toronto. It was our first event in at least six months - neither of us can remember when we last went to an event.

What a wonderful setting! Casa Loma really sets a wonderful atmosphere for medieval recreation, even though it dates back only to the 1930s. I do wish the event organizers had mentioned that the afternoon part of the event was being held in the stables, semi-outdoors. I'd have brought a cloak. Good thing the weather co-operated and the temperatures were quite reasonable for early November in Ontario.

My spinning yesterday was a mess! Almost all of what I spun at the event started pulling apart in my hands, with the least bit of pressure. I wonder if it was the different temperatures and humidity of being outdoors. The first skein of yarn off the spindle uses the same wool and is approximately the same diameter. It didn't break but it was all done indoors.

Tonight, I made a new apple pie. This time I've tried it using Granny Smith apples. Last week's pie was perfect in every way except.... it was boring. Bland. So bland I didn't even blog about it.

So this one, I decided to try Granny Smith apples, a much sharper flavour then the Courtlands that I used last week. Granny Smiths are hands-down my favourite just for normal eating, so we'll see how they work in a pie. It's late, and the pie isn't cooled enough yet, so I'll have to taste-test it for breakfast. :)

Oh, and there were tarts to finish up the dough. Strawberry-Rhubarb and Wildberry, but that filling came out of can, so they don't really count. On the perfectionist domestic goddess scale, of course.

Staying Power, in the garden 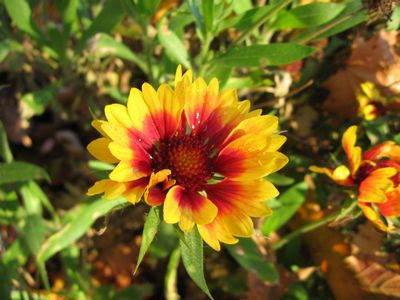 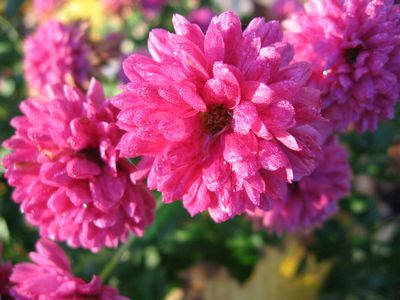 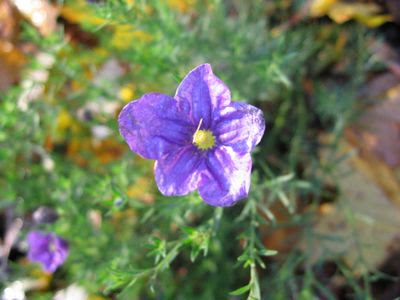 It's November and I still have a few flowers left!

And it hasn't snowed yet!

Pictures of said flowers to be posted tonight.