The reporting is getting a bit behind the reality. It was a few weeks ago now that I was at the Woodstock Fleece Festival, where I found this delightful fleece waiting to be taken home by someone. The vendors and displays inside weren't nearly as much fun as the creatures on the outside of the building. No pictures there. And although I didn't find a new spinning wheel, which I was hunting for, I did gather some new Shetland rovings, which I need like I need a hole in the head. 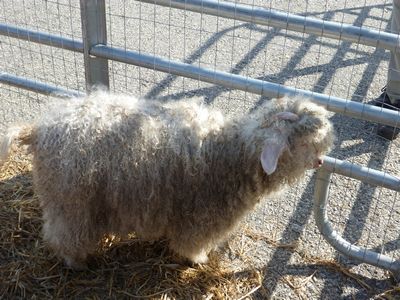 Came home that weekend to discover that somehow we'd managed to overlook this nest all summer long. Can't imagine how. We did notice an increase in wasps in the yard, but I guess neither of us ever looked up.

It's gone now. I had some guys from the local nursery do some yard work last week, and handed off the task to them amongst the other chores. 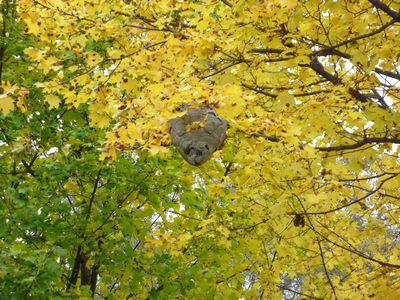 Leaves, of course, are everywhere. Neil got this new gadget that sucks and mulches them. It's been very handy.

But this one leaf paused on the way down to attach itself to the bird feeder.

Bird feeder by Darrell Markewitz at Wareham Forge. Advertising is intentional - he's our friend. And I really like the bird feeder! 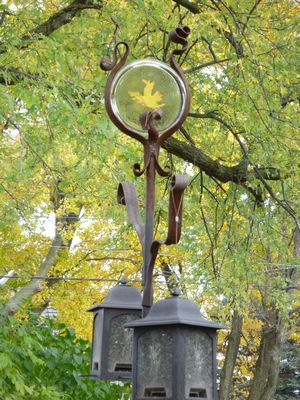 Bogenschutzenfest, the pottery, handspun on the loom!

This is one of my favourite pieces from the clay firing. It started out as a bowl, and collapsed, and turned into a small vase. 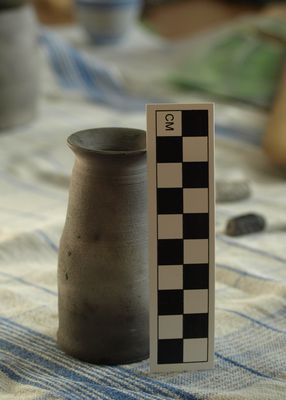 We made our yearly usual appearance at Bogenschutzenfest. I love this event. I don't really know why. 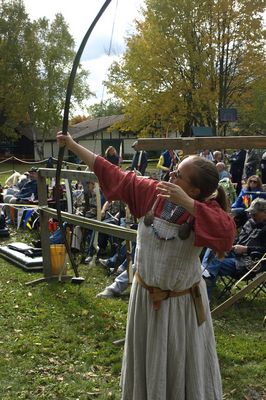 Maybe it's the archery, maybe it's the silly factor. You see, there's this styrofoam bird on top of flag pole..... and the bar opens halfway through the day. 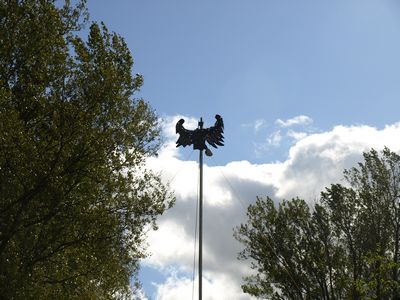 On a more serious note, I have finally decided to weave with my handspun. 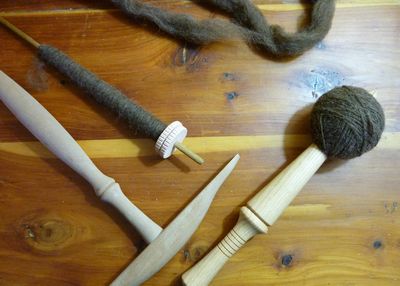 There it is, in mid-warp. I'm holding my breath. It's scary. 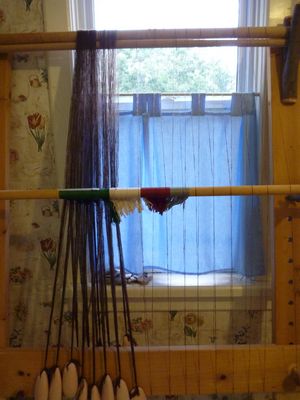 Back in September, one of the groups in the SCA held an event loosely based on a Viking Althing. The Althing is basically a gathering in Iceland's history where all the people came together to hear the laws read out, and some legal cases decided. Because they only happened once a year, the Althing was also sort of a party / merchant / craftsman mecca.

The Dark Ages Recreation Company - www.darkcompany.ca - and Regia - www.regia.ca - and Torvik - www.torvik.org - were all asked to participate as well and show off our unique Viking Era skills.

I'm a part of the DARC group. This is what the 'viking' street looked like, with DARC folk front and center and Regia and Torvik at the far end.

It's hard to parse from this picture, but DARC had 'booths' with a money changer and pewter caster, a fellow working on a pole lathe turning wood, a tavern for the group cooking appropriate foodstuffs (and boy, was that ever a discussion in the planning stages!), a textiles co-operative, a wood carver, a blacksmith, and a bead merchant. 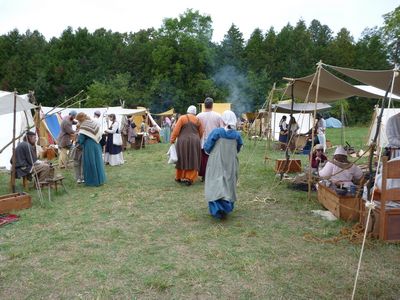 I was mostly spinning all day in the textiles co-operative and sometimes helping out in the kitchen. 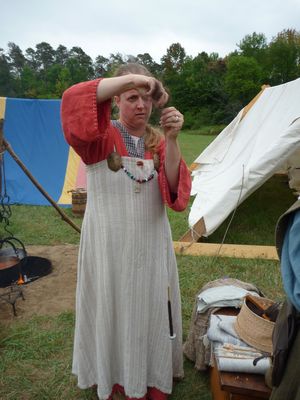 Kadja is also part of DARC and was experimenting with pit firing clay vessels. She and Foote the Potter (from Regia) are seen here covering the pit fire. 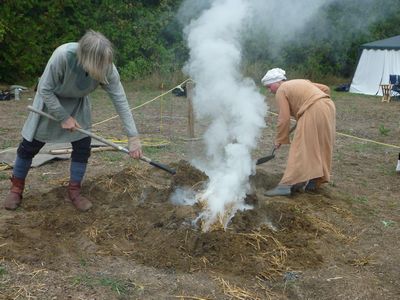 It's a process that takes a full day. Digging a pit, carefully placing fragile pottery and building a smoking fire on top of it, and then burying the whole thing to burn out underground, gradually 'curing' the clay.

The next morning, we all (those who had pots in the fire) helped dig out the pots... it was really neat. Some of my pots actually survived! 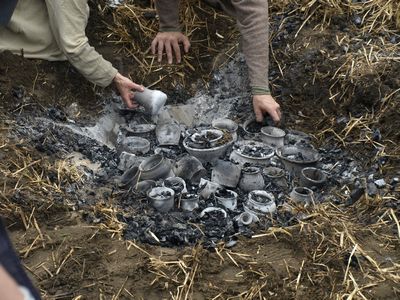 Snorri showed up to peruse the pots....

Remember Snorri from our trip to Iceland in July? Well, when we got home, we sent him off to Peterborough to travel back to Iceland and then on to Denmark and England with another couple, who returned and gave him back to Steve, his maker. Who knows where Snorri will show up next? 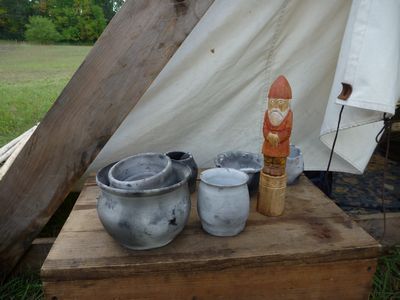