Ginger came home tonight! Now we get to feed her via a feeding tube, installed in her neck. Oh joy, oh bliss.

But she is home, and seems happy to be here. And the feeding tube should go away in a couple of weeks as she starts to eat on her own again.

I've also been dyeing, with the golden marguerite (aka dyer's chamomille). Flower heads in one pot, and their leaves and stalks in the other. The wool rovings that went into the flower pot was pre-mordanted two nights ago with alum, and the yarn that went into the other pot was accompanied by a rusty iron nugget.

I came home at mid-day yesterday, after the contents of my stomach left the building, so I turned on the dye baths, and promptly fell asleep on the couch. Woke up an hour later to find them boiling, and turned them off. Fortunately I hadn't added the wool yet. I tested the flower heads dye bath with some cheap yarn to see if I'd ruined the colour but it turned out okay.

When the dyebaths had cooled sufficiently so as to not shock and felt the wool, I added it and turned the heat up again to simmer for a few hours.

The colours are delightful. :)

This is the results of the flower heads dye bath. Originally white icelandic rovings, pre-mordanted in alum. 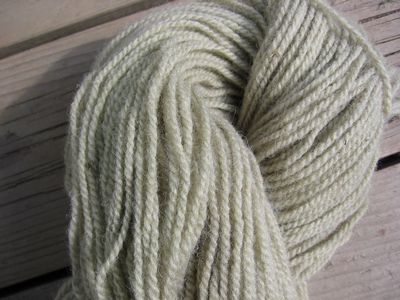 This is the results of the dye bath from the golden marguerite stalks and leaves. Originally white mysterious yarn, iron nugget acting as mordant, in the dye pot. 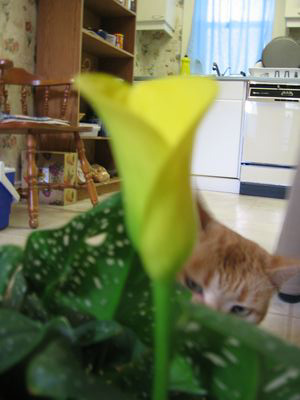 Ginger, a few weeks ago, before her current illness, checking out the new plant to eat. 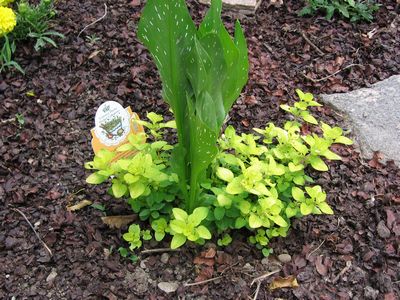 So that's where I put the calla lilly bulb.... I'd forgotten where I planted the bulbs when I later planted the golden oregeno.

So anyway... had a little pissy moment on thursday, not having gotten any comments on posts for well over a week. So I had to start thinking about why I blog.

I think I have some unchallenged creative energies, that perhaps blogging is something akin to an artistic endeavor. Maybe more of a crafty one.

Fiber geeks will recognize that arguement - is it an art form, is it a craft?

And I'm that weird mixture that many creative people are - wanting to share that creativity with the world and be recognized, and wanting just to _do_, and being too shy and self-conscious to actually advertise myself.

I blog because I want to stand out somehow ('though with millions blogging right now, one wonders) and yet I'm too shy to put myself into all the right places to get the traffic that would get the comments.

I'd be a starving artist, or crafter, if I didn't have a day job.

I won't be giving it up any time soon. Day job, or the creative urges.

Ginger, and getting a bone off my chest

Ginger's recovering slowly, still in the Cat Hospital. She has something called 'fatty liver', which is apparently entirely curable.

Thanks one and all for your concern. The drought of well-wishers has been memorable.

I suppose it's a good thing that I just like playing with gadgets....

Oh my god, I can't believe that Rowling killed that particular character.

It's so not fair that everyone that Harry looks to as a parental figure dies.

And I liked him! 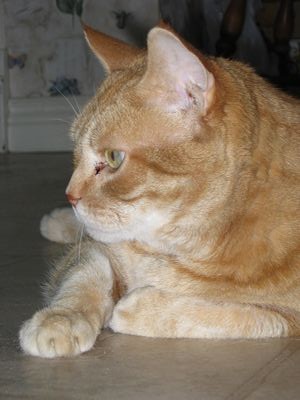 Ginger cat went into the Cat Hospital on thursday. She hasn't been eating or pooping for a few days, and apparently she was very dehydrated. Poor kitty.

I'm of mixed feelings - some of which aren't so happy-making. I miss her and I know she's in good hands, but my allergies are better without her, and it's nice to not have to yell at her for scratching the carpet and curtains in the middle of the night, or to have to carefully watch the door while loading in groceries.

Her prognosis seems to be good, we'll learn more today when we vist, but at 17, she won't be with us all that much longer. 20 is the average age for most cats. I honestly don't know whether I'll get another when she does pass on.

On another note 'though, it may not have been the wisest idea to visit Chapters after dropping her off at the Cat Hospital. 4 books, 2 magazines** and a Godiva bar later - only 2 days before the Harry Potter release - I might have been working off some empty space anxiety. Ya think?

Anyway, it's been a few days since I threw ya a few pics of the garden. 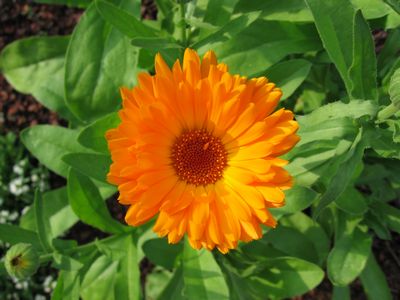 This is the Calendula, my current favourite. What a wonderful collection of bright orange flowers! You can dye with this plant, but the colours are insignificant. More important is it's medicinal use as an antiseptic for burns, cuts and bruises. Not that I know how to get from plant to medicine just yet. 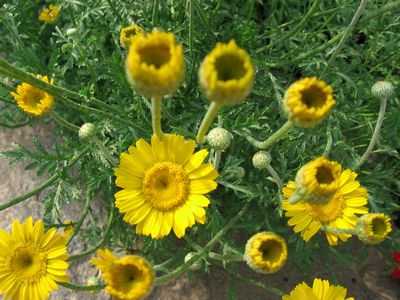 Now, the Golden Marguerite, aka Dyer's Chamomille, is an excellent dye plant. And I have more then enough of it this year to experiment with. I'll start collecting in a few days when the blooms start to dye off. It's also just plain stunning in it's abundance, spread and beauty. 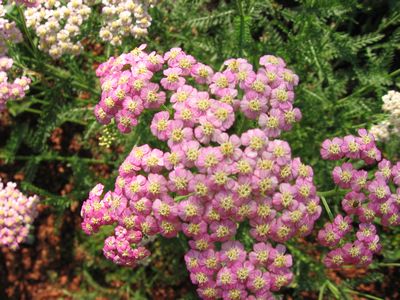 I'm also enjoying the Yarrow this year. I think this is the original variety, but there are apparently many new cultivars on the market this year and some of those colours are quite pretty as well. Yarrow is also a medicinal plant - a quick Google search lists liver, digestive, menstrual and antispasmodic uses. Again, I'm no expert.

** Tanya Huff's "Valor's Choice" and "The Better Part of Valor" - hmmph, she's a Canadian author and she allowed the publisher to spell "Valour" in the American. I just noticed. How annoying. But's she's an excellent author, nonetheless. I'd just been putting off these two books because I tend to like fantasy better then military sci-fi.

Julie Czerneda's "Survival" and "A Thousand Words for Stranger". Both are first volumes of trilogies. So if I like them, I'll need to go get the rest of the set. She's a new author to me.

Bitch mag and Canadian Gardening, which is where I found out about the new varieties of Yarrow.

A is for Achievement

Woohoo! I have finally, in mid-July, planted the last plant I have any intention to plant. I have achieved a goal.

The little babies from the alkanet and dyer's broom are finally in the ground instead of their seed pots.

I feel so proud.

I can clean up the back patio, such as it can yet be called a patio. But that's a different kind of project, yet to be achieved.

Now, those plants that I may just happen upon ...that's another story. :) But I am running out of room until next year.

Did I mention the folks visited on sunday? Well, they did and my mom mentioned that my peppers are quite a bit bigger then hers at the moment. And we bought them in the same place back in May. That made me feel good because I had been worried about the progress of my veggie garden.

My folks also seem to have this strange way of socializing. They seem to believe that the family that weeds together, stays together. I was hard pressed to protest. :)

Vandy got herself a blog! I'll put a link in when she lets me.

Been watching a lot of Babylon 5 on DVD lately. It's such a good show 'though I do keep wishing that JMS could have written the whole story without having to accomadate mid-story network cancellations, actor's egos, and budget constraints.

Back spasms, sinus troubles and TMJ - all in one week. No fun.

But I did get the lawn cut yesterday, and today I spread some Scott's turf-builder stuff. And we went and got more mulch (yet more mulch) to add to the new space. Maybe I'll get out there soon.

Spent the holiday (that's Canada Day, on July 1, for the non-Canadians out there) quite pleasantly. Where else? In my garden. :) I was in an incredibly zen place with the weeds and spent hours pulling them without the least bit of frustration. I filled up a rather large size plastic tub with weeds. We really need to get a composter going.

Saturday on the other hand, wasn't exactly what I'd call pleasant. But I am left with a feeling of achievement and dozens of sore muscles to prove it.

The hubby and I went up to his mother's place to help re-shingle the roof. My advice for all the middle-aged out there? If anyone asks you to volunteer to re-shingle a roof - just say no.

Unless of course, you actually enjoy hard physical labour in the sun for hours on end. If so, then it's right up your alley.

All in all, I think I spent 6-7 hours on the roof. And for the most part, I was the only girl and probably the oldest person up there.

At supper-time, I changed into real clothes* and played the Girl card. You know, the one that lets you off of hard physical labour on account of being a Girl.

Then again, Neil** and I spent the next hour or so chainsawing up some broken limbs in the mother's yard, which is in and of itself physical labour, although not quite so demanding as roofing. But it was on the ground. And safe. Relatively speaking.

On sunday, I spent most of the day on the couch having a sinus reaction to something - either dripping, doing that whole body sneezing thing, or napping (because sleeping is the only time my sinuses would go anywhere near clearing). Fun, Wow. I figure it was a reaction to a combination of altitude change, hard labour, heat exhaustion, and the septic tank that overflowed the morning before we went to do the roofing.

* Real clothes being defined as clean and Girl-like.

**Neil played the Bad Knees card to avoid going back up on the roof again after supper.
posted at 2:02 p.m. 2 comments: