Forward Into the Past XX, and unknown flowers

The 20th anniversary Forward Into the Past has come, and gone. It was fun.

Sadly, I was too busy to take photos.

Now, there's been a warm streak happening in Ontario and my garden is starting to grow. Again, I'm faced with I-didn't-keep-the-tag-and-I-don't-remember-what-that-is. Bad gardener girl. 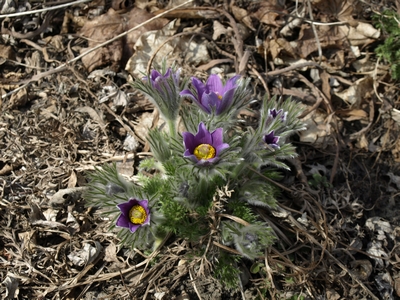 Email ThisBlogThis!Share to TwitterShare to FacebookShare to Pinterest
Categories: Forward Into the Past, garden

We had a lovely dinner at Solé tonight. We went because they had a special Celebration of the Sea menu and we both love seafood.

For dessert, we split a lemon and poppyseed cheesecake with a raspberry coulis.

We're restaurant-testing, you see. We have to decide where to take Michele for dinner next friday.

I've now had the comments section spammed a few times too many. I had hoped it was an isolated incident or two, but it's becoming more frequent. I promise for those of you who are actually writing a real comment, I'll be quick to approve them.

Bet you're wondering where the month of February went to, right?

So much for that New Year's resolution. :)

It's just that it's so much faster and easier to update my Facebook status then it is to blog. One needs real content for a blog, or pictures.

Anyhoo.... I am otherwise a tad more organized. I have all the kid's (nieces and nephews) birthdays on a wall calendar, and I've remembered birthday cards for two of them so far. Neil and I worked out a gifting scheme based on their ages.

And I've been reading more then the goal set worth of articles or book chapters in my field so far.... but I do have incentive.

Forward Into the Past is a yearly event, on March 27th this year, at which I laughingly pretend that teaching doesn't scare the crap out of me. This year, I'm teaching a class introducing people to the warp weighted loom. I had a real fit a few weeks and called in someone more likely to teach me a thing or two. What the heck am I doing teaching if I can't figure it out myself? But I digress.

I learned a few things, and I'm in the middle of warping up yet another new project on the loom to apply said things.

Hopefully I'll know what I'm doing enough by then...

But if not, if it's an utter failure, there's another incentive to keep researching... DARC is going to L'Anse aux Meadows this year in August, and apparently I'm the weaver. Eep.

I feel.... well, a little panicked, to tell the truth. And the hubby wonders why my body is showing stress symptons in back and muscle pain, and intestinal distress. *rolling eyes*

On the bright side.... I didn't mention this one as a New Year's goal because everyone does it, and everyone fails at it, but I wanted to exercise more often this year. And so far.... while I can't yet call it an established habit, I am doing okay on this goal. Well... better then last year anyway. The jury is still debating the outcome.

Spring, here in Ontario, does seem to be making itself known. There have been warmer temperatures (although we still have snow), some bulbs in really really warm brick wall braced south facing gardens are showing (on campus of course, not at our house), I've changed out of snow boots, birds have been heard singing, ducks on campus are abounding, and the sunshine is getting lengthier. All to the good.

But this is still Canada, and I don't want to be skeptical. :)